Indigenous Australian senator Lidia Thorpe was made to repeat the oath of allegiance for Australian parliamentarians on Monday, August 1, after she described the Queen as a “coloniser” while being sworn in.

Thorpe, a Greens senator for Victoria, was absent from parliament last week when other senators were officially sworn in, so she took her oath on Monday morning.

Walking to the Senate floor with her right fist raised in the air, Thorpe was asked to recite the words written on a card.

“I sovereign, Lidia Thorpe, do solemnly and sincerely swear that I will be faithful and I bear true allegiance to the colonising her majesty Queen Elizabeth II,” she said.

The word “colonising” is not in the formal oath.

She was immediately interrupted by Senate president, Sue Lines, and made to restart.

“You’re not a senator if you don’t do it properly,” another senator told her as she was urged to repeat the oath.

Another senator was heard saying to Thorpe in disapproval: “none of us like it.”

Thorpe later tweeted “sovereignty never ceded” as she shared a photo of her swearing-in. 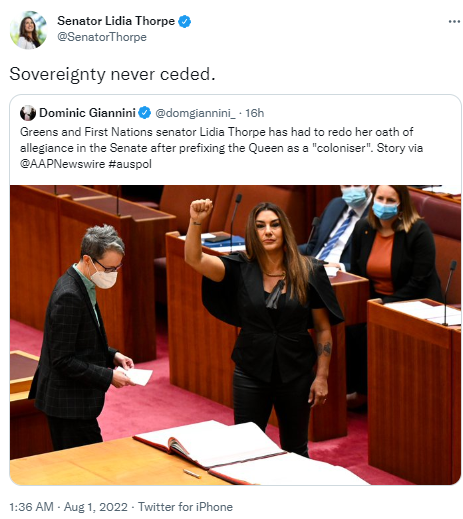 Watch the video below.

VIDEO | “Nancy Isime has done her body. Almost 90 per cent of Nigerian celebrities have gone under the knife” – Blessing Okoro says